Top 5 Ways to Record Games on your Iphone/Ipod Touch

Ever had a mobile game or app that you really wanted to record footage of?  Unfortunately, there aren’t many well-known ways on how to do this.  It doesn’t help that neither the App Store or Itunes has a downloadable screen recorder, or that your device doesn’t have a built-in screen recorder.  Unless you are capable of taking about 20-30 screenshots a second, you

Recording with your PC or desktop computer

(Note: iTools does not work with recent ios versions including ios 8+)

Connect your device to your computer or laptop by using the usb adapter that came with it.  Next, you want to install an application called “iTools” on your computer.  iTools is a useful application which will let you use a screen capturing device to record your device’s screen in real time.  Download iTools, and click on the “Desktop” tab on the sidebar. 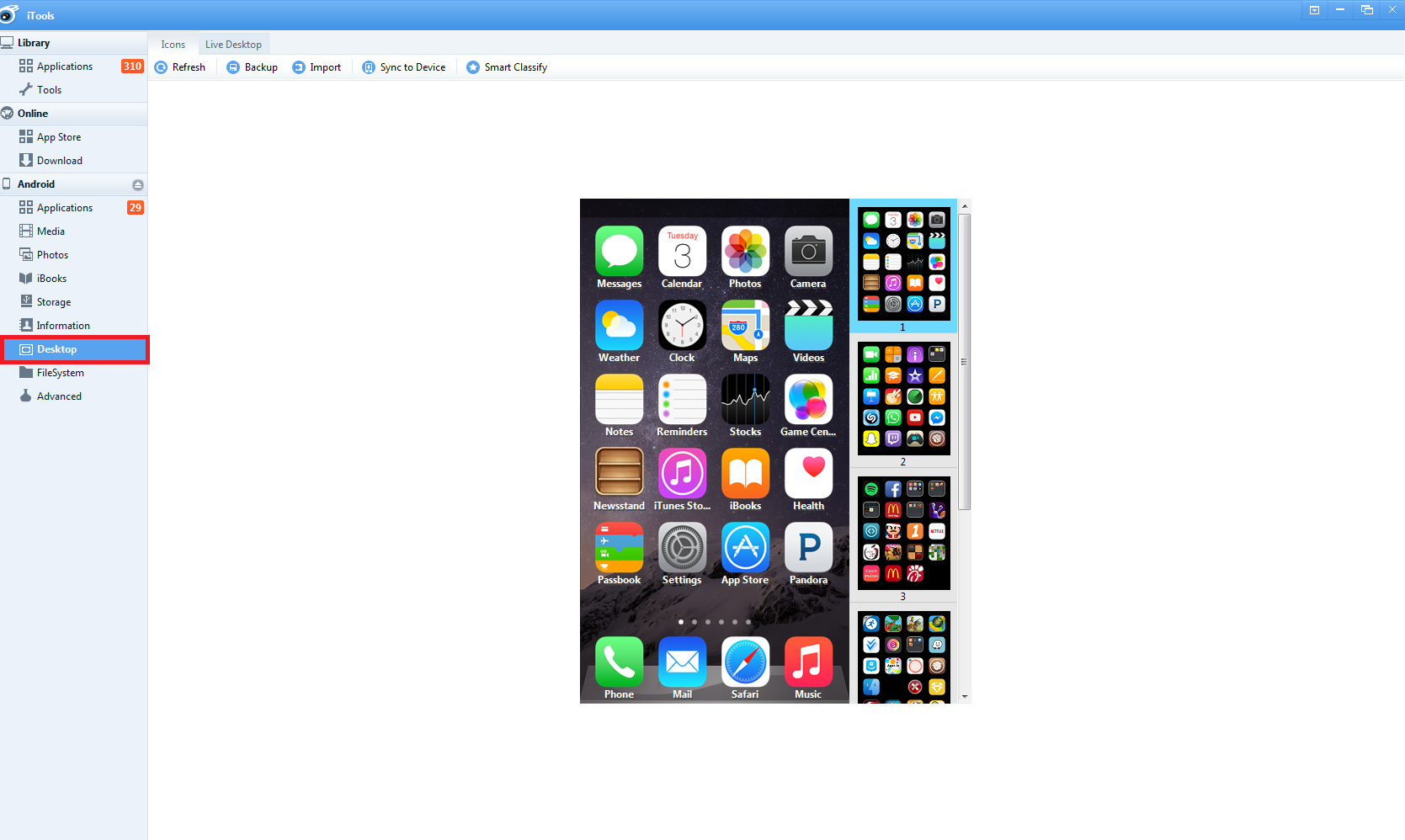 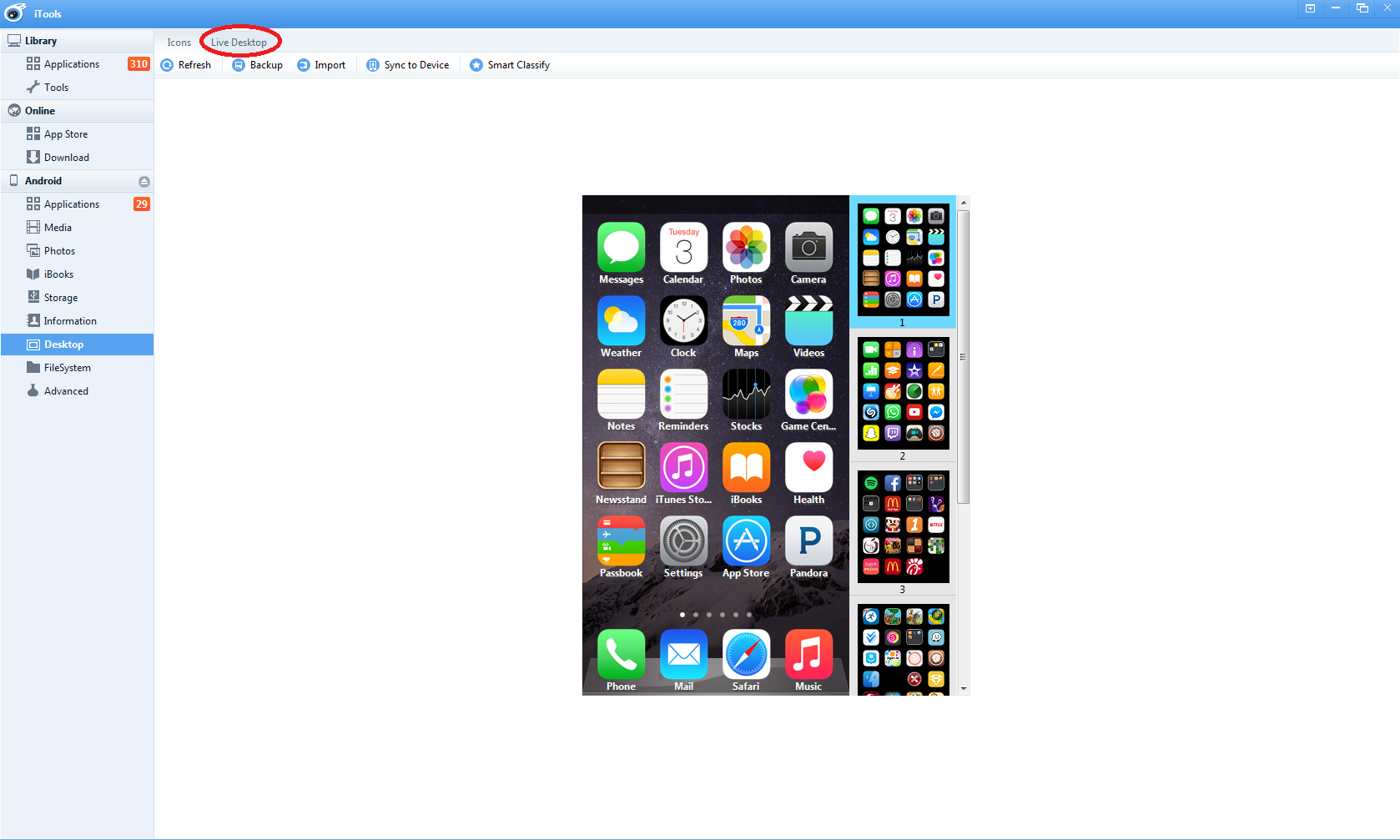 Use the tutorial found here to jailbreak your device.  If your device is already jailbroken, you may skip this step.  After jailbreaking your device, open cydia.  If Jailbroken successfully, you will end up with a “Cydia” app like this: 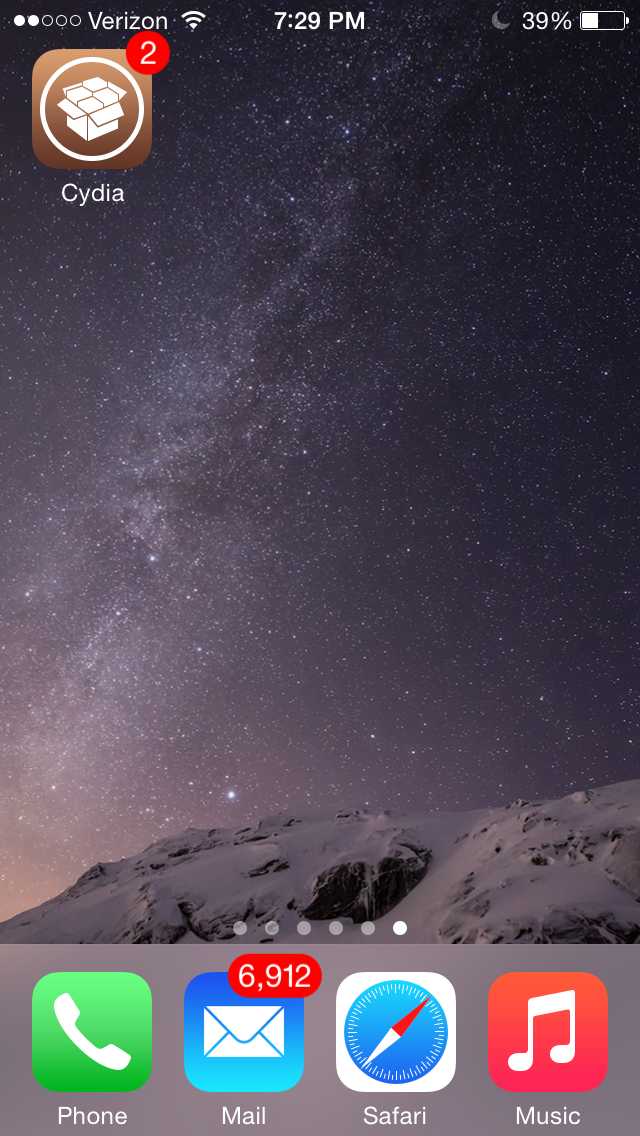 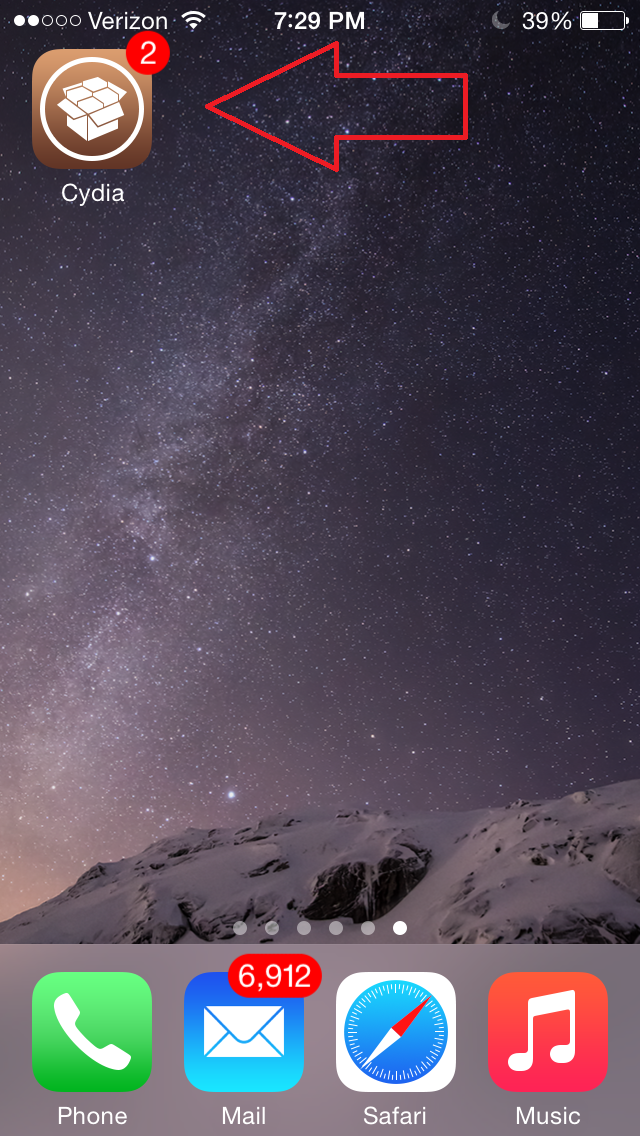 Install iRecorder.  Search for iRec on the cydia store and click “Install” on the top right corner of the screen as pictured.  You may experience a lot of delay the first few times you use cydia – that is normal. 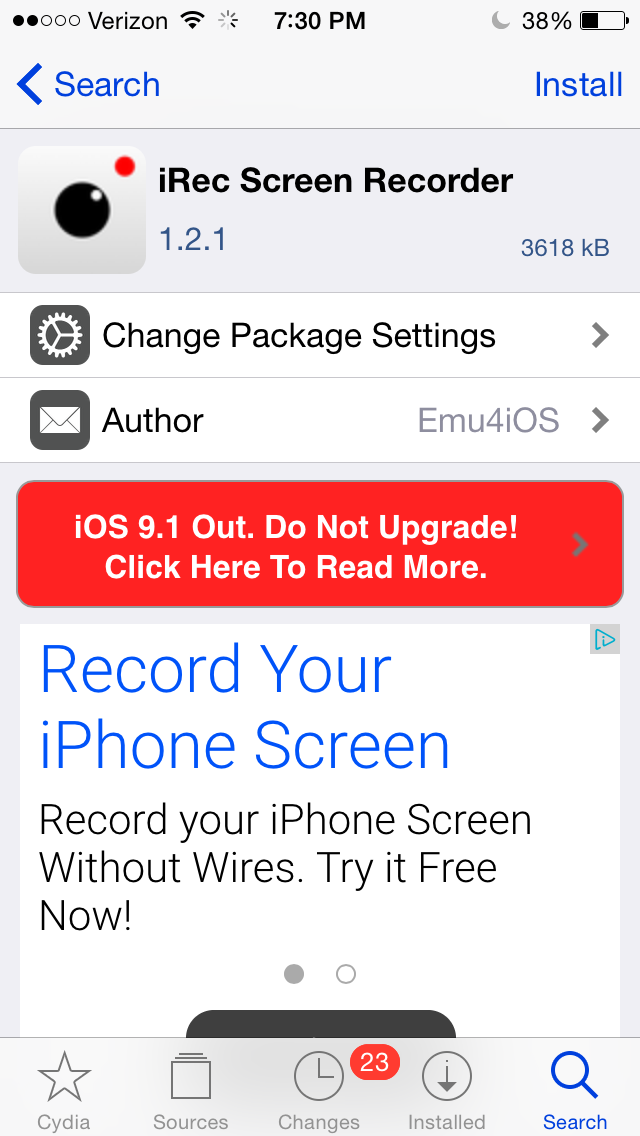 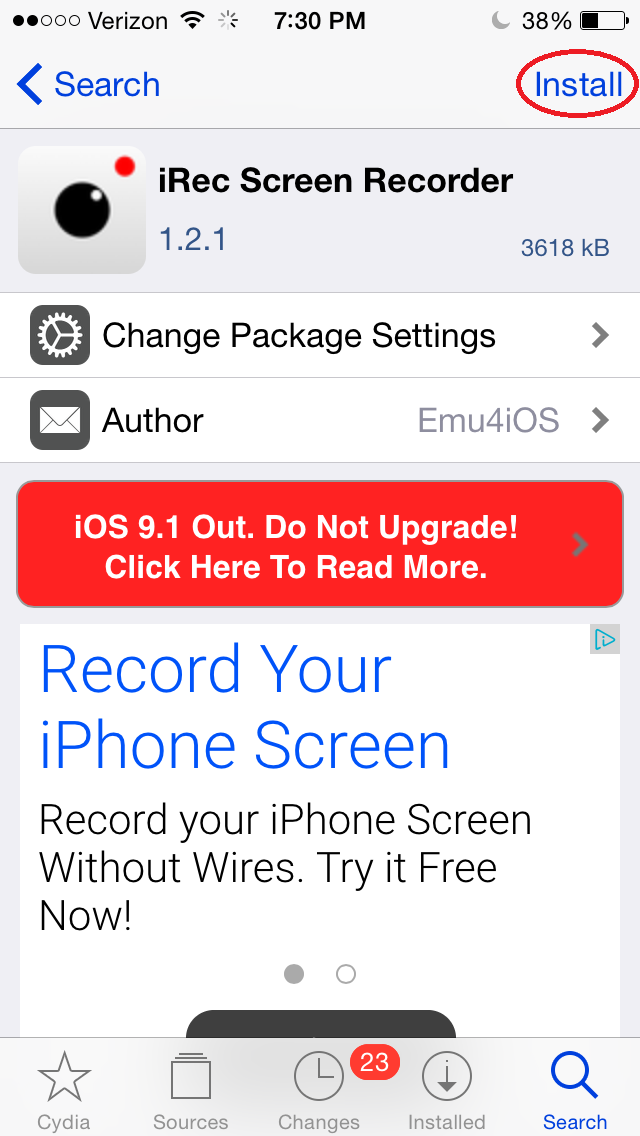 When iRec finishes installing, simply open the app.  Next, you want to give your recording a name.  The recording name is not what your video will be called when you upload it to YouTube, you can choose that later.  Name your recording, and tap “Start Recording.” 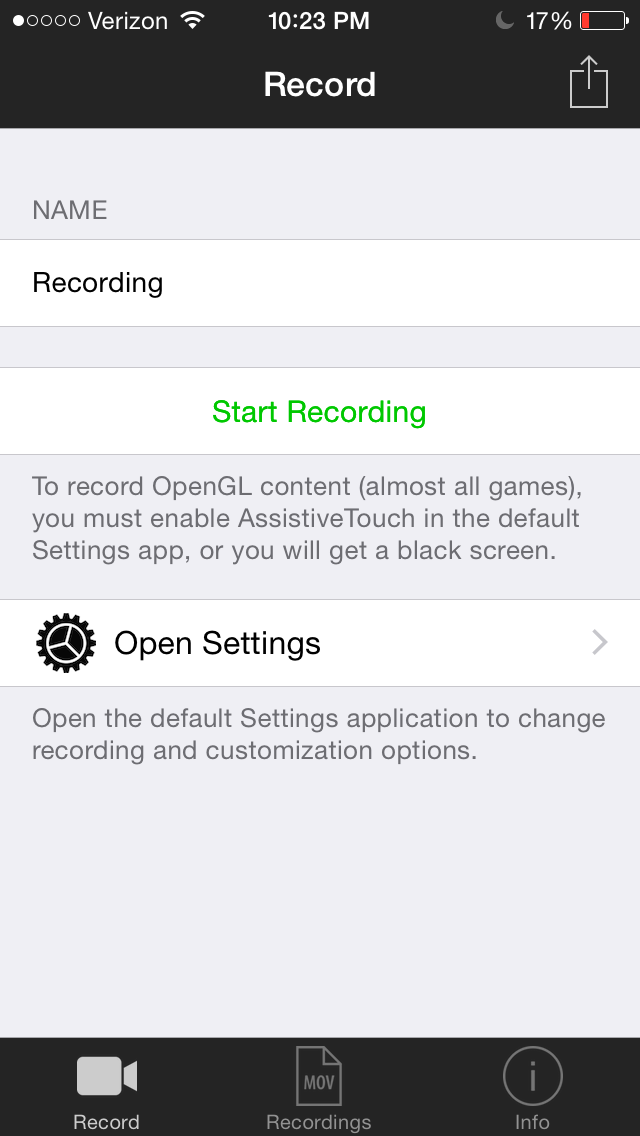 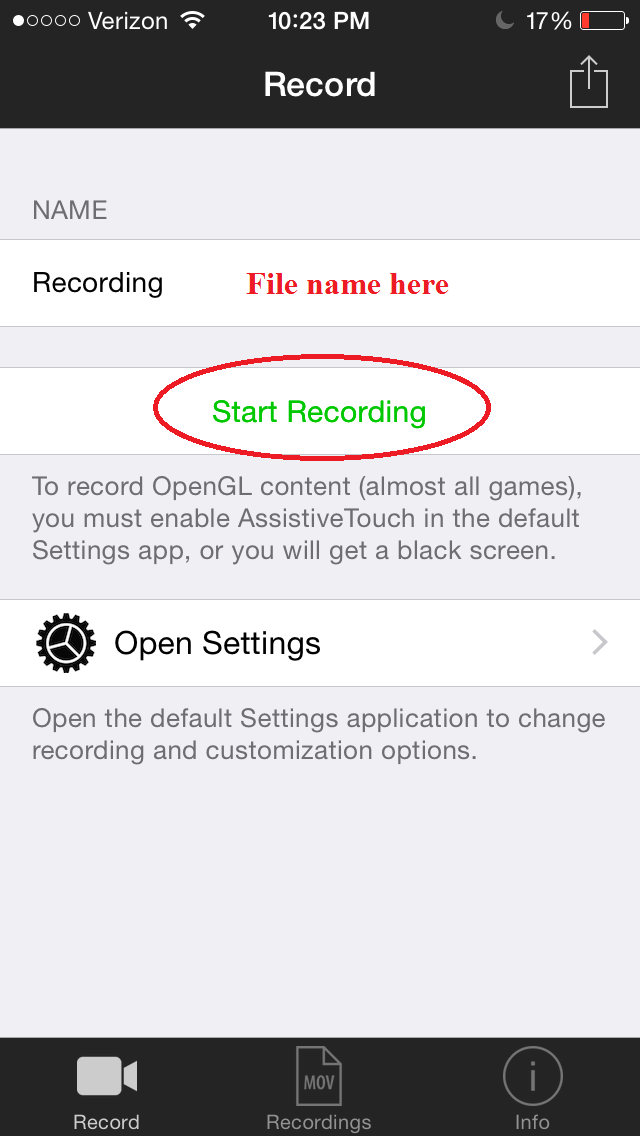 All movies and videos can be placed on your camera roll and uploaded directly to either your PC or Youtube.  Resolution can change drastically, so I would advise against directly uploading your video to YouTube.

With a partial jailbreak.  This method does not require a computer at all and is the fastest method by far.

Visit https://emu4ios.net/ on your device’s browser.

You should get a page that looks similar to this: 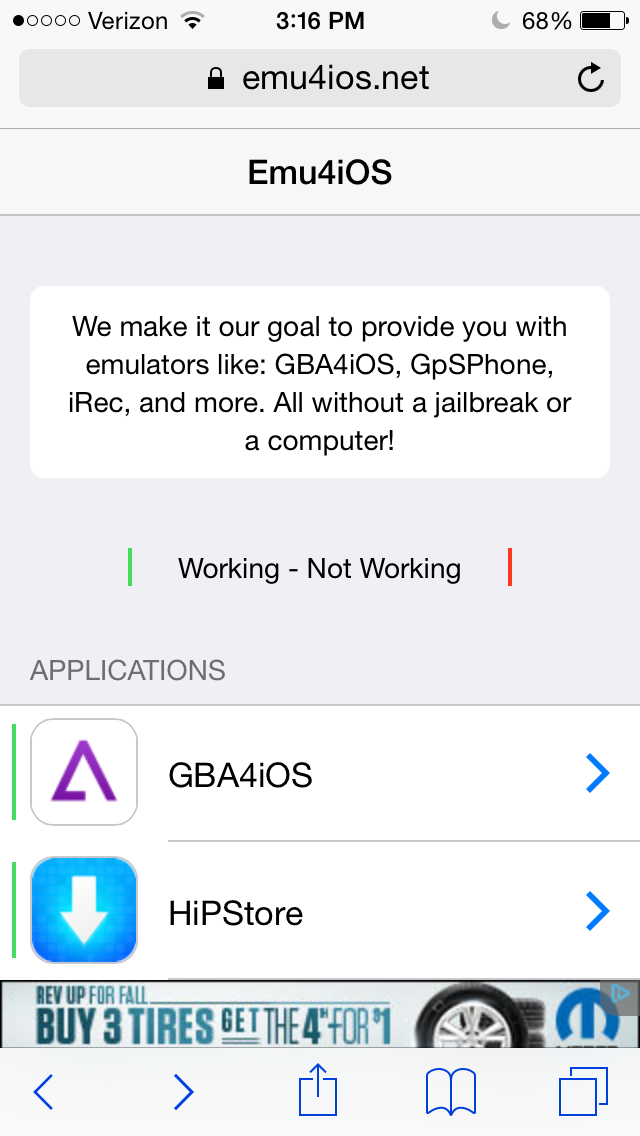 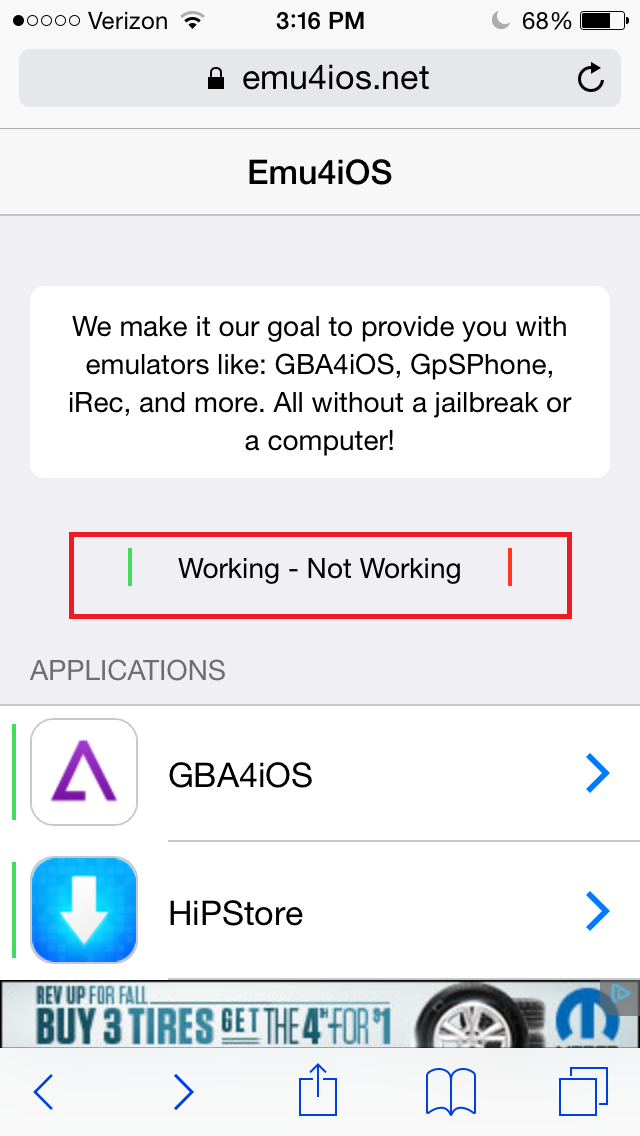 Scroll down until you find “iRec.”

(If there is a green bar next to the app that means it is compatible with your current version of IOS.) 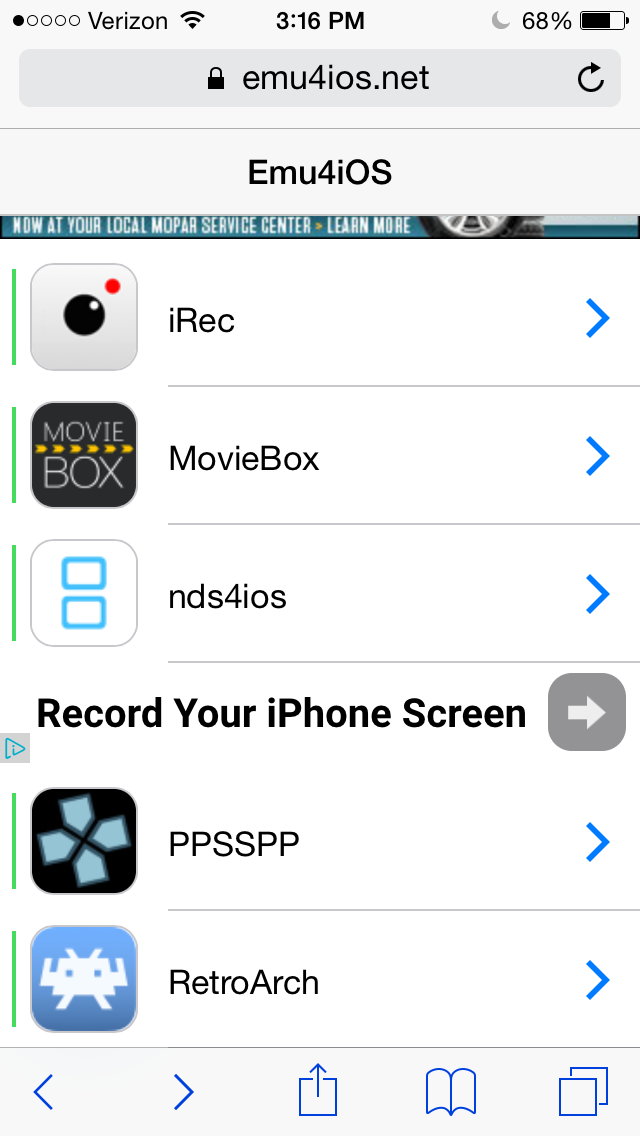 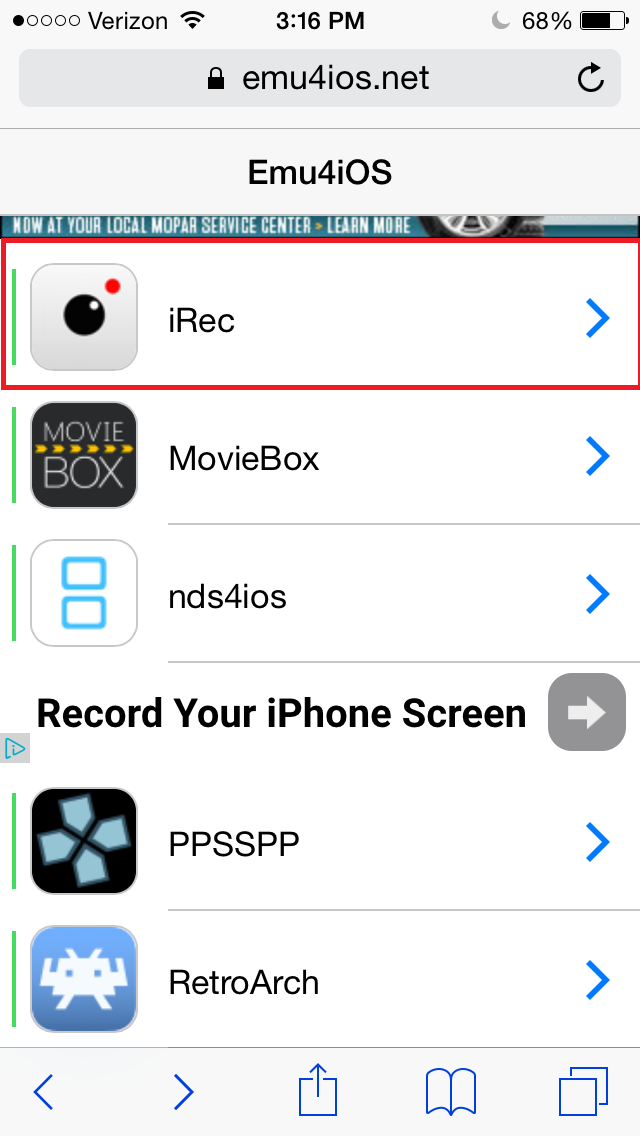 Tap “GET” to install the app. 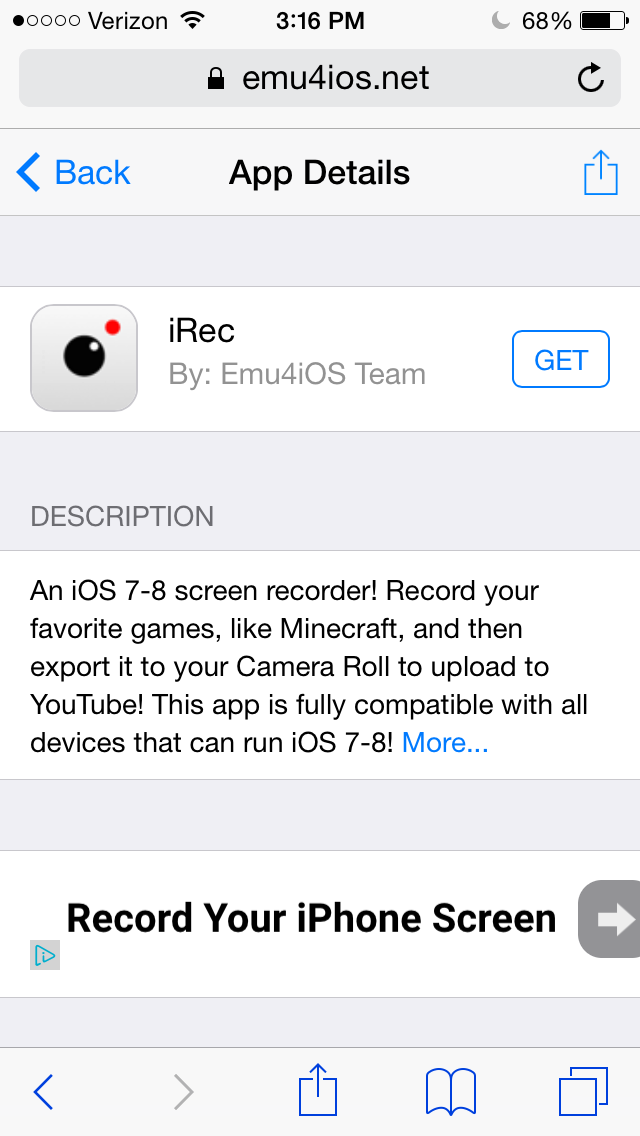 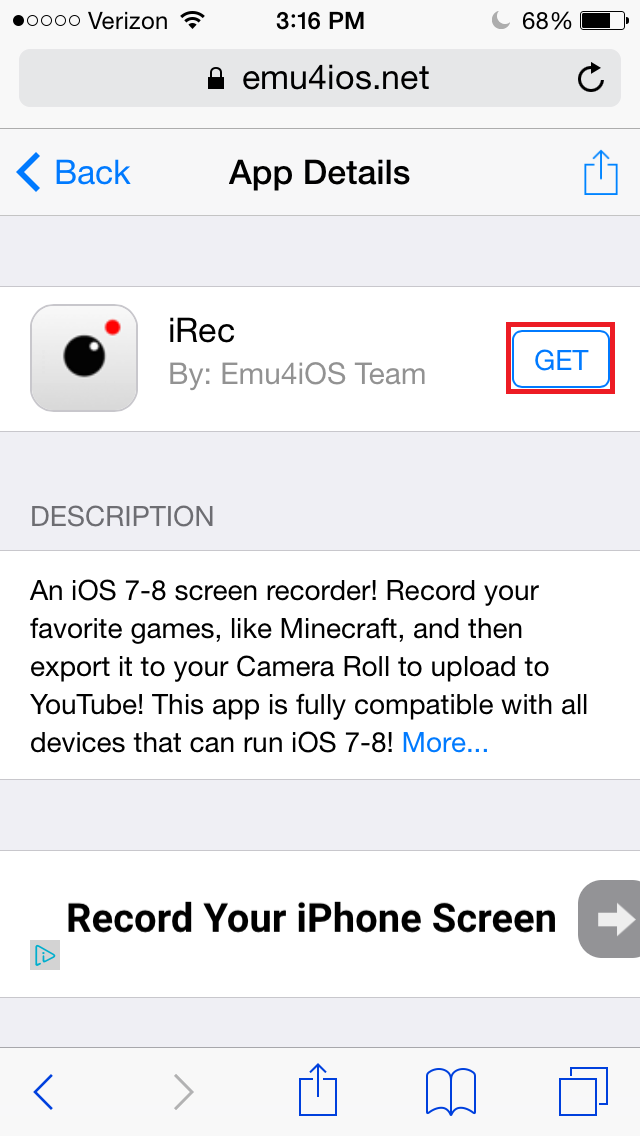 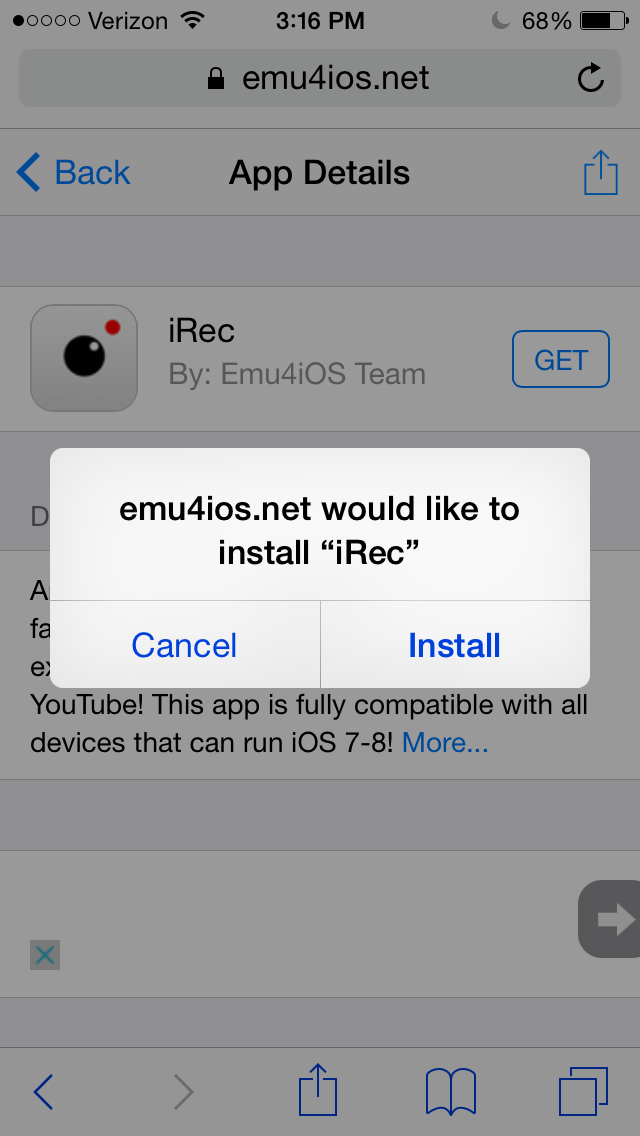 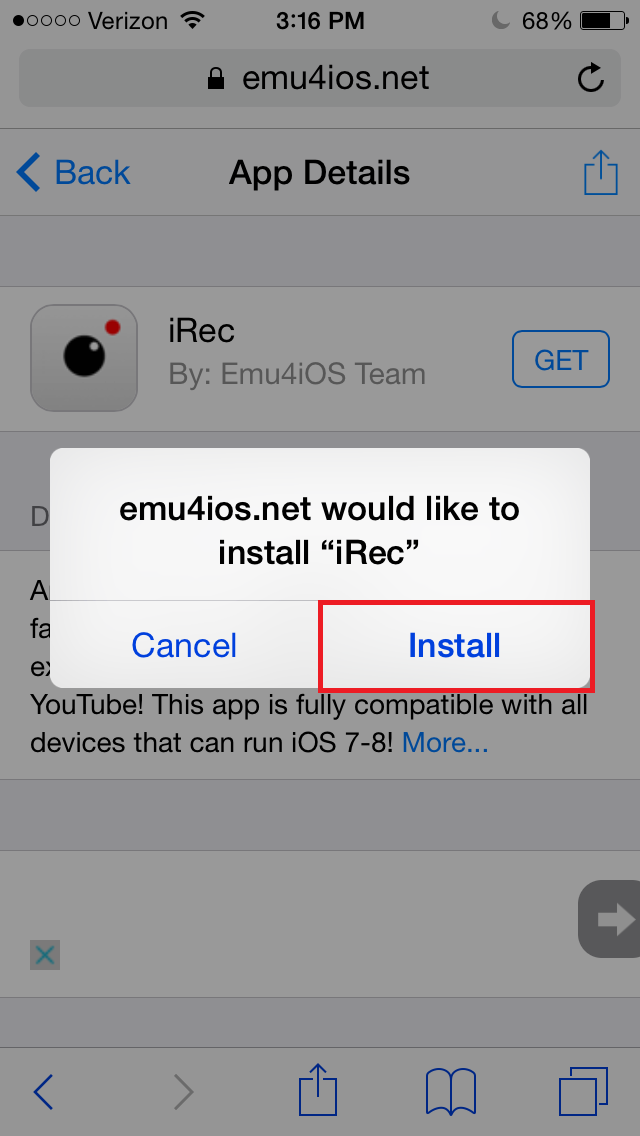 After tapping install, iRec should appear on your home screen.

All movies and videos can be placed on your camera roll and uploaded directly to either your PC or Youtube.